............ Star-lord is also an acceptable option as boyfriend material. I don't want to be too restricted by the idea of Wade Wilson or metaphorical unicorns. One's dream man can be many different things. Piercing blue eyes probably help.  A sense of being somehow cosmic helps too and Star-lord is certainly cosmic - as in totally far-out-man and a galactic traveller. What do you mean I'm unrealistic? ;-)

I love that he's holding a pint and a ray gun in the picture below. Haha. Nonchalantly being a hero. Indeed, superheroes aren't meant to be perfect. As Colossus states in Deadpool - it's just four or five moments. 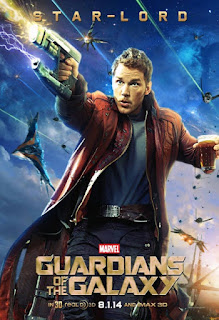