Benedict again, the flustering prospect of him beyond the screen

I commented on a post earlier today, which posed the question "what would you say, if you saw Benedict Cumberbatch walking down the street".  This, I felt, was a good question because oddly, I had never considered such a happening.  Mostly because the chance of me spotting BC a-wandering down the street is super slim.  He is jet-set fabulous actor man, I'm rural Cheshire hippy mum.  But if I did bump into him, what would I say......

I'd like to say, "Hello, you were amazing in basically everything I've seen you in".  "Do women often faint when they meet you or do they manage to remain upright with support"?  *attempts to create an overly dramatic, comedic faint move whilst simultaneously making it absolutely clear that said overly dramatic, comedic faint move is a compliment to BC's perfect loveliness*. 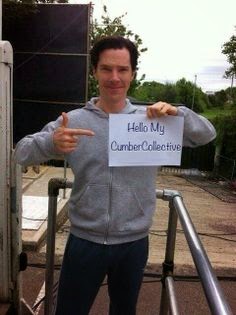 The reality would play out something like this - assuming I were able to activate my vocal chords beyond anything that didn't resemblance total, awestruck silence, I anticipate that the words exiting my mouth would make very little sense whatsoever.  I'd babble and I'd blush.  In fact, I'd blush at a luminescent level.  I also suspect that I'd be wearing my clothes inside out or have food on my face or be in the midst of a parenting shame-shout at my toddler or something else equally horrific.  Rather than the above sentences, I'd say "Hello *stammers, coughs, stammers*, you were amazing, erm you are amazing". *Actually faints, ambulance is called*.  Epic fail.

Despite the fact that I clearly represent the most uncool elements of Ben's CumberCollective, it must be tremendously flattering for BC that soooooo many ladies fluster at the thought of him.  Keep weaving your magic Benedict.  We love it.