You Wanna Be Adored?


I have been giving quite a bit of thought to narcissistic personality traits. And, as I write these words, my playlist landed on I Wanna Be Adored by The Stone Roses. Coincidence? Doubtful. Everyone, to some degree, wants to be adored. We want to be valued, respected, admired. As human beings, it is absolutely standard practice to desire love and to return that love. It's balanced thus rather marvellous. Yet some of us seek worship. In certain cases, it is an emphatic need for adoration, at the expense of all others. This is the modus operandi of the narcissist.

Unfortunately, I’ve been attracted to quite a few narcissists. Some have been much worse than others. One in particular may well have been a psychopath. This revelation is a little alarming, to say the least.

Why have I chosen men with broken personalities who see a romantic partner as an extension of themselves? How have I failed to recognise such awful personality traits? Am I completely bereft of wisdom? Or, as something of an empath, do I want to make broken people whole?

I believe the latter description holds the most truth. Whilst I certainly don’t suggest that I have attained ascension as a person. Indeed, if I was to say that, Im fairly sure I’d be heading in a narcissistic direction myself. I do believe that I’m fairly self-aware, reflective and emotionally intelligent. I’m definitely too empathetic for my own good. I see the good in people, even when it's absent.

If I think back to every single important romantic relationship in my life so far, each one has been imbalanced. Those I've loved have needed fixing. They haven't all been narcissists (phewy) but not one of them has been relationship ready. Some were still in love with their exes. Others were emotionally immature etc etc. And, as suggested, there have been the men who slid around on the scum of the narcissism continuum. Yikes.

So now I’ve recognised the pattern, how do I fix it? A kind friend suggested, rather amusingly, that I should deliberately choose someone I'm not attracted to. She was joking. Yet there is seriousness to her wise words. Though, how do I choose someone I’m not attracted to? Attraction is the very basis of romantic entanglement. Hmmm, maybe some reprogramming is in order…….

In the meantime, if any of the traits in the following article relate to you, then stay the hell away from me. ;-) Actually, seriously. If anyone is interested in applying for the romantic partner vacancy, narcissistic / psychopathic personality types need not bother. (Moot point alert: because narcissists don't recognise themselves as narcissists. Oh the hilarity).

Fortunately I have an app in my phone which beeps every time I stumble across a narcissist. Ok, I don't but wouldn't that be handy. On a serious note, I think I'm now able to recognise the traits fairly swiftly. I just need to avoid people who are otherwise broken, whilst still retaining my preference for wordiness. Looks like Beyonce's Single Ladies will remain my theme tune for the foreseeable then. 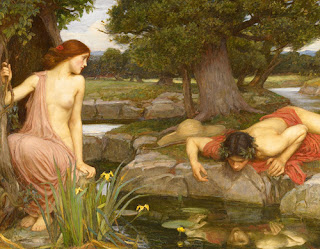