I saw a picture a few days ago. I stared at it for a long time. The man in the image was familiar but I didn't know why. Not a first. It was a man who committed a crime in America many years ago. The recolouration of the image made it appear recent. The man seemed to be posing for the camera. Only on closer inspection could I see the ancient hand-cuffs and the thread bare clothes. I discovered that it was a picture of Lewis Powell / Payne, captured and sentenced to death because he had been found guilty of conspiracy to kidnap Abraham Lincoln.

He didn't look like he belonged there. He looked like he had found himself in the wrong place, at the wrong time. From what I've read, he met his co-conspirators by chance. His life may have lasted longer, if their paths hadn't crossed. How sad.

As hinted, his image was familiar to me. I realised that he looked like somebody that I used to know. So much so, it was if the man I knew had travelled back in time.  In fact, I used to wish that he could time travel. To a future point, where his emotions were healed. Of course, I don't feel like that now because my emotions are connecting with someone else. Nevertheless, seeing this picture was an eerie experience for me. Two men. Incredibly alike. Both ghosts. 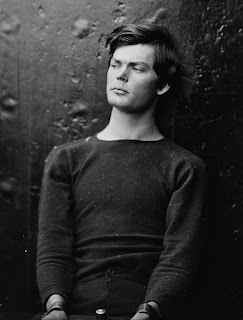