Oh war memorial man of Alsager, how many times I've walked past you and noted your striking resemblance to a rock guitarist. The way you hold your rifle. Fingers poised for a spellbinding solo, rather than warfare. Said rifle resembling the flying V, if you squint a bit and drink a lot. 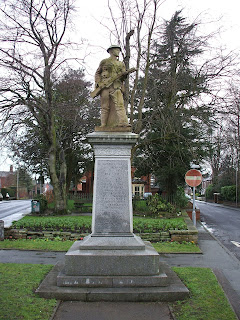 I have so many vague memories of shouting ‘Angus’ at your stoney visage because in the dark of night, through misty eyes, you are much like Angus Young from AC-DC.


Now that The Arms public house has gone. An empty space stands where once there was a monument to raucous behaviour. I don't suppose I'll drunkenly rock salute your stoney self anytime soon.


And yes I know what the real statue represents. A fallen hero or rather a testament to the many who fell because some idiot thought war would be a good idea. Thus there is much sadness in my ridiculous humour.


I don't suppose many politicians would agree but make music, not war.