Given my, frankly appalling ability to play the so called dating game, I'm never sure how much or how little to communicate with potential daters. If I'm not particularly interested in the person, I'll naturally gravitate towards limited communication before confirming their suspicions but if I'm interested, I'm up in faces like an annoying moth.


However I'm aware that other women, who I suppose can be deemed competition, are playing the game. They are skilled in the ways of hard to get. Activate Carrie Bradshaw mode (note, phone thought it fitting to suggest Carrie Bradshaw yeti because obviously that's a thing): Does my lack of hard-to-get, give my ‘competition’ the upper hand? Could it be that despite myriad loveliness, the hard-to-getters are always more likely to commence a relationship than I am?


A little background: Before aging, parenthood and prior to the e-romance revolution - dating was easy. I would meet someone, then swiftly decide if dating would proceed. Job done. Oh it's light years from this now. It's like paddling through shite without guarantee of the grail at the end of the struggle.


Plus there are further barriers which did not apply in my youth. I previously based my choice of partner on the following: is he hot. Over time my impression of hot changed from: he looks like he could front a boy band to he looks like could front a rock band. These days my list of attractiveness criteria is roughly comparable with War and Peace. I have become difficult to please in dating.


Given the barriers I've created for myself, perhaps I should start playing the game. Perhaps delayed gratification is absolutely necessary because the rules clearly state that every man desires a challenge. I detest the idea of a woman as a reward. It feels like the epitome of objectification. I am more than happy to signal my interest by dropping my symbolic hankey but I do not want to be metaphorically jousted for. Appreciate me for who I am, not for what I represent to you (as I believe Alanis Morisette once sang).


Yet whichever way one looks at it, women no longer have their pick of men. It seems like there are masses of single women and very few, relationship ready, single men. So I suppose I shall have to commence a game changer. For the first time ever, I'm going to have to play hard to get. Tips and techniques gratefully received.

March edit: still no game plan, happy to keep it that way. 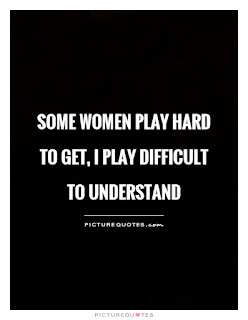